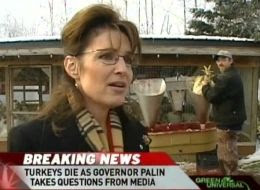 Above: I can feel my tummy rumbling already!
It's nearly Thanksgiving, which means we're doing the links a little early this week. These should make for some good postprandial reading, if you don't lapse immediately into a meat coma.

(By the way, did you know my first job was at a turkey farm? I have intimate knowledge of how that bird gets to your table. I've seen things I can't un-see.)

-Simon Parkin is taking nominations for the best game writing of 2008. I'd never be so tacky as to nominate myself, but, you know, if you think there's anything I've done that might be worthy of the honor, I certainly won't stop you from suggesting it to him. Ahem.

-One of those fascinating cross-blog conversations blew up this week. At issue is whether game reviewers sufficiently value innovation. Leigh wrote two posts saying that innovation gets short shrift, N'Gai rebutted by saying that execution is paramount, and Leigh responded once more that there may be more common ground than N'Gai gave her credit for. For myself, I agree with N'Gai's points. Innovation is a means, not an end. The goal, in my view, is to make fun games that are easy to play.* If innovation helps with that, then innovate away! But without execution, innovation doesn't mean much. Sometimes you might have a great idea without being able to work out all the kinks, which seems to be what happened with Mirror's Edge.

(I covered some of this ground in a post last summer, "Standards and practices.")

-I loved Daniel Purvis's write-up of playing Left 4 Dead with strangers. The notion of the players' personalities creating a storyline within the more open-ended framework of the gameplay is exciting, and something I wouldn't have expected. My copy of Left 4 Dead is still in the shrinkwrap, but I think this weekend I'm going to rectify that.

-Tim Rogers's review of Gears of War 2 is insane. I don't mean that in a bad way. I mean the man's passion for the game has transported him to another plane of being, where he is unconstrained by your petty human concerns. He has become Shiva, destroyer of worlds.

*Not to be confused with easy games.
Posted by Mitch Krpata at 9:00 AM

Thanks for the props Mitch, and for the link to the Action Button review. I think his most poignant point, of all he makes, is this one:

"Let’s go ahead and mint a brand new law to be obeyed from here on out by all those seeking citizenship in the kingdom of videogames: if your game isn’t fun enough to be enthralling in the context of an endless mode, nothing else about it means shit."