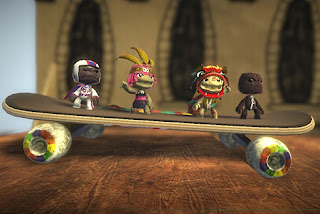 Above: That's the power of love
I haven't devoted much space to discussing LittleBigPlanet here in the blog, and if you click over to read my LBP review in the Phoenix, you'll probably see why. I couldn't muster much excitement for the level editor, which is the game's main appeal. User levels can be impressive, but most often even the neat-looking ones still don't seem like that much fun to play. Even messing around with Sackboy's facial expressions and arm movements seemed hilarious at first, and then -- so what? "So what" sums up my whole reaction, in fact.

I will say that I've been troubled by reports of the zealous moderation of user-created levels. I can understand Sony's position regarding copyrighted material, but at the same time, what the hell did they think would happen when they gave people the tools? And when the level editor is the one and only reason for people to keep playing this past last week, making people afraid to put time and effort into their works is foolish. I mean, when the Azure Palace went offline briefly, people must have been considering a boycott. That was absurd.
Posted by Mitch Krpata at 8:47 AM

LittleBigPlanet made me realize I just don't accept or appreciate user-generated content as a selling point. I enjoy appreciating good game design when I play a game; playing LBP, I feel like I went to a gallery to buy a painting and they took my money and gave me a wooden box full of brushes and pigments.

I think that was a fair review, even if I disagree. ^_^ Likening it to a box of LEGOs is a great way to attract the people that will fall for the game and guide the people that won't elsewhere.

The thing about the Azure Palace "moderation" is that it was never moderated. The policy is to take flagged content offline immediately, and then go back and review the levels to see if they were rightly flagged or not. They placed a level of trust in the community (that was apparently unfounded) to not falsely flag levels, and they placed a priority on ensuring that offending content remained available for the shortest possible amount of time. The blame for the Azure Palace getting temporarily put into review limbo lies squarely on the scoliosis-ridden backs of griefers and jackasses trying to make a point in the most backward way possible.

Gary, I really agree. As inspired as some of these levels are, they don't have the benefit of the rigorous testing and balancing that goes into professionally created games. No matter how impressive parts of them are, they rarely seem to rise past the level of "neat." Not that I've played all of them, of course, and no doubt there will be some super ones here and there. But, again, so what? Just don't get it.

Julian, it's good that it wasn't permanently deleted or anything. It's just a shame that Sony -- or Media Molecule, or whoever -- has to be so gun-shy. Of course they don't have a choice. But that undercuts a lot of the game's appeal. Something similar is happening with Guitar Hero World Tour's song creator, I understand.

you're not dead inside. The truth is that while the whole affair is ceaselessly charming (Stephen Fry, for chrissake!) it's just not compelling. Gary's comment is spot on about the limits of the creation-aspect, and though I enjoy trolling the user-created levels I never feel drawn to the game when I sit on the couch.

I've been trying to play with my ladyfriend, but she finds the platforming controls really frustrating. (Couldn't we lose a plane of depth, maybe?) Though I have a doggedly positive feeling towards the game I just never feel like playing it, given the other available options.

I guess one of my questions at this point is: is it going to get better? Will the continual expansion of biodiversity lead, in a darwinian fashion, to a superior product over the long term? I just don't know.

Hmm I don't totally agree. But you made some fair points.

Iv been reading your posts for about a week now, and I have to say I love your posts. As there regular, un-biased and above all very Intelligently written.

Iroquois, LBP didn't pass the wife test at my house either, and for the same reason. She just couldn't make Sackboy do what she wanted, although she did seem to enjoy customizing him. As to whether or not it gets better in the years to come, as I say in the review, I'm just not sure I'll be motivated to check in and find out.

A littel off-topic but it would seem, from this journalistic coverage, that I should probably read The Phoenix for more than just game reviews:

Adelaide, Australia, doesn't really have this sort of biting coverage.