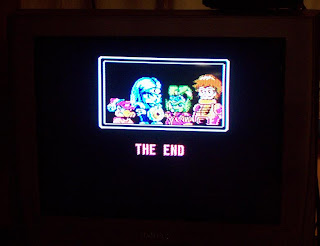 Above: The ending screen from Bucky O'Hare. It was totally worth the effort.
I often suspect, but don't want to admit, that many of my fondest gaming memories have less to do with the games themselves, and more to do with the circumstances in which I played them. Our neighbors down the street had an NES long before we did, and my first memories of playing Super Mario Bros. are at their house on a summer day, after splashing around in their pool all afternoon. I spent every day of February vacation in sixth grade trying to beat Sonic the Hedgehog 2 with two other kids in my neighborhood, and I was the first to succeed. Playing Quake 2 for hundreds of hours in high school wouldn't have mattered nearly as much if I hadn't formed a clan with some of my best friends.

It's hard to evalute old games fairly. Have you ever gotten your hands on a decades-old classic for the first time and wondered what all the fuss was about? Maybe you have warm and fuzzy feelings toward an 8-bit game nobody else liked, simply because it was the only one you owned and you had mastered it. Old games stir up all kinds of associations, prejudices, and emotions that we just can't separate from the gameplay as it is.

I had a chance to relive the childhood experience recently, at my friend Mike's bachelor party. We hooked up a Wii in one room and an NES in the other.* We had loads of classic games, including Mega Man 2, River City Ransom, a couple of Double Dragons, and so on. But for some reason, as the night wore on, a group of us found ourselves committed to playing Bucky O'Hare. Apparently, it was based on a short-lived cartoon show from the early 1990s, of which I have no memory. But this was probably around the time that any hope of high-quality licensed games was starting to die.

It's not that Bucky O'Hare was bereft of good ideas. Although you start the game playing only as the title character, as you progress you gain the ability to switch between Bucky and his crew members on the fly. Each one has a unique power that comes in handy at different times. One of them can hover, one can climb walls, one has a super-powered weapon, and so on. It's a neat mechanic, and the levels -- particularly near the end -- are designed to force you to switch characters often.

The problem, though, was that the game was brutally difficult in the classic 8-bit sense. Every boss battle was based on identifying fast-moving and constantly shifting attack patterns. Levels involving moving mine carts and shifting platforms required memorization in addition to quick reflexes. One-hit deaths were everywhere. The saving grace was that Bucky granted infinite continues, not just from the start of each world, but from the beginning of each substage. That's the only thing that kept us going.

So we pressed on, through the night and into the early morning. We traded off continues. Those not holding the controller looked for patterns and advised the player what hazards were coming next. At boss encounters, we analyzed attacks and suggested possible weaknessse. When things got really rough, my long-ago childhood friend Ryan -- the gaming savant whom I've mentioned before -- came into to slam the door. He bailed us out of so many seemingly impossible boss battles that we started referring to him as our closer.

We didn't beat Bucky O'Hare that night. Fortunately, the game had a password system, so we brought it to Mike's house the night before the wedding and got right back to work. Our group was smaller now, but no less dedicated. Only the groomsmen remained. Two days before, we had been strangers. Now, we worked together like a commando unit. We penetrated ever deeper into the endless final castle. We ascended shifting blocks tipped with insta-kill spikes. We swerved through speeder bike levels, and and dueled a massive airship. Ryan took pity on us and obliterated a Mother Brain-like boss. We kept going past midnight. Eventually, I could take no more, and fell asleep on the couch.

When I woke up shortly thereafter, no one was playing anymore, and I saw the screen that graces the top of this post. "Did we do it?" I asked, although the answer was clear. "We did it," they said. Victory.

Bucky O'Hare is not a great game. I would not recommend that anybody download the ROM, or petition Nintendo to release it on Virtual Console. But it's worth remembering, as we binge on one fall release after another, what pleasures can be found in playing one game, any game, in the right circumstances. It's satisfying to beat a game. It's fun to play with others. And it's gratifying to meet people who care about the same silly things you do. This is why I started playing video games.

*Isn't this what you do at a bachelor party?
Posted by Mitch Krpata at 7:00 AM

I actually had Bucky O'Hare as a kid on my NES as well. Either myself or my mother had purchased it based on the packaging, as I too had never seen the show. I don't remember if I ever actually beat it, but I remembered liking it a lot.

A couple of years ago, I discovered Nintendo8 and one of the first games I sought out was Bucky. And wow, it's a lot harder and a lot less fun than I remembered. Over the course of a couple of weeks, I powered through the first few planets but gave it when it came time to escape that giant ship. I imagine it was substantially more enjoyable to play it with a group of like-minded fellows.

It's very pleasing to know that there was another, more qualified, crew who did manage to croak some toads (or whatever they were) and beat that game in this decade. Well played sir.

I had the same experience with the NES game Little Nemo: The Dream Master and the PC game Enemy Territory.

With the first I traded off with my brother and we played the game dozens of times. Nemo could take over various animals with different abilities. The game was hard enough to challenge us, but we knew we could beat it, so we played it over and over.

With Enemy Territory, a multi-player team-based objective game, I managed to find an amazing server with a great group of people that became friends outside of the game as well. The game isn't the best multi-player game I've ever played, but nothing has surpassed it yet because the community just can't live up to my expectations.

One of my fondest gaming memories is being snowed in with roommates and a couple other random people with nothing but a copy of Parappa to pass the time. The controller went around the room until we finally finished it. Took all day.

I never played Bucky, but heard it was ridiculously hard.

My brother (who is probably about your age) and I were talking about freaking hard NES games the other day.Good thing you guys didn't go with Solar Jetman, or you'd be toast.

I need to move somewhere with more snow. Any excuse to spend an entire day playing a game with a group of people is worthwhile.

That doesn't sound entirely dissimilar from my bachelor party... We drove all the way across Washington State to play Lazer Quest (it's just a fancy lazer tag built into a multi-story warehouse). Nerds unite!

Some of my most enjoyable experiences gaming are passing the controller back and forth, trading continues. I've recently been doing this with the later stages of the Tower of Lost Souls in SoulCalibur 4. Somehow, having a buddy to hand the controller to and say "here, you give it a shot" takes the sting out of your 20th defeat. It's also a valuable tool for improving your technique, devising new strategies and fixing flaws in your game.

It's like a football coach going over game tapes and pointing out things players could do differently, except there's a sense of reciprocity so instead of a power hierarchy, you get two (or more) equals working together at the top of their ability to refine one another. It's a kind of lasting fun that I simply cannot get out of a competitive multiplayer environment. I mean, a good game of Halo on the couch is a beautiful thing, but it's an order of magnitude better to do the co-op thing, and an order of magnitude better than that to trade off.

I absolutely love this post. It's so true. Last Christmas I revisited Bonk's Adventure and played it all the way through. It was like reliving a moment in my past.

I'm weirdly obsessed with Bucky O'Hare for the NES.

Fun Fact: the game was designed and developed by the future president of Treasure, one Masato Maegawa. Actually, it was one of the last things he did at Konami. I like to think Bucky O'Hare is the reason Treasure exists: so disgusted was he by the proposition of making more serviceable games from absolutely heinous licenses, Maegawa decided to risk everything and start his own company rather than risk another Bucky O'Hare assignment from on high.

*le sigh* As per usual, I've been thinking something similar of the old games and the rose-tinted glasses through which we view them, and our experience with them.

As you can probably tell by my Twitter feed on the weekends, I often spend time playing old PlayStation games with my good friend Matt and we often discuss what it is about the various games we've most fondly remembered.

The last bachelor party I attended we played Dungeons and Dragons. So yes, this happens and probably should.

Really enjoyable post, thankyou. The nostalgic title of glory for me was Super Mario Kart. I remember playing it for hours in a department store whilst my Mum went looking for clothes. You'd think that there might have been an anti-climax when I eventually got my hands on the thing some 12 months later, but no - I just kept on playing that game. No Mario Kart, however good, has ever caught the feeling of the original for me - all thanks to a slightly neglectful parent. Thanks Mum!