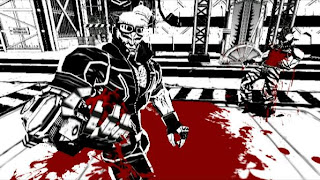 Above: What Sega hopes to do to the competition in the Wii market.
My friend Bob wanted to know about MadWorld.

"It's a beat-em-up," I said. "But it's in black and white, which is neat, and it's unbelievably violent. You get points for killing a guy, but you get more points for impaling him with a road sign, stuffing him into a trash can, and throwing him in front of a moving train."

I hadn't thought about it, but yes, Sega's ultraviolent MadWorld is only available for Nintendo's cuddly Wii, and not for PlayStation 3 or Xbox 360. The Wii's library is so far outside the milieu of the career gamer that I realized, upon loading up MadWorld, that I hadn't even turned the system on since October, when I was playing Mega Man 9. There was nothing during the holiday season that seemed worth playing instead of Dead Space, Far Cry 2, Gears of War 2, Fallout 3, Left 4 Dead, and so on and so on.

But let's just pause a moment, and look at some numbers:

Those are the lifetime sales for the Wii, Xbox 360, and PlayStation 3, respectively. In other words, the Wii, on its own, has sold almost as many units as the Xbox and PlayStation combined. 19,000,000 people have a Wii in their house and nobody is trying to sell them on "hardcore" games. Nobody, that is, except Sega.

In February, Sega dropped House of the Dead: Overkill, which has already been awarded the dubious distinction of holding the world record for profanity in a video game. Soon, Sega will publish The Conduit, touted as a graphically intensive FPS. And MadWorld combines over-the-top violence with black humor and a slick presentation that's got to be offputting to the granny set. Clearly, instead of battling other publishers on their own terms, Sega is trying to plant their flag in virgin territory.*

Is it working? Well, House of the Dead (released 2/10/09) sold only 45,000 units in February, finishing well outside of the top 10 best-selling Wii games in February. Of course it was outsold by Wii Fit, but it also couldn't make a dent in the sales of copycats like My Fitness Trainer and Jillian Michaels Fitness Ultimatum. Quality could be an issue: despite some decent reviews, Overkill didn't set the world on fire. Mature titles like Resident Evil 4 have proven that it's possible for edgier far to be commercially successful on the Wii. The jury's still out on the Sega strategy, but it warms my heart to know they're out there trying.

*Isn't it awesome after you write a piece like this and find a news story that not only proves your point, but renders it redundant.

I really want for these games to succeed on the Wii, because I as well haven't used my Wii in like forever. But honestly, I don't see Madworld selling that great... I want it to, but I don't think it will. It's just not the kind of game that most people that own a Wii will buy.

Let's just say I moved last June, and after I bought Overkill I realized I hadn't even booted up my Wii since then. I'm glad I did though, because that game kicks ass.

Man, maybe once House of the Dead is $20 I won't be able to resist picking it up. I've been surprised how much people seem to like it.

I think we're edging into an era with better, more hardcore games on the Wii, but also one that will really rely on word-of-mouth to get games into the hands of people who will like them. There have been several games released these past few months that really have a hardcore edge. Quality is an issue for some of them, but the larger problem is publicity. Which core gamers had heard anything about Deadly Creatures or Tenchu? Of those who had, who thought those games might be for them?

I already play this game and of course it's very violent and nice, the think about the blood and the black and white it's very nice to me.