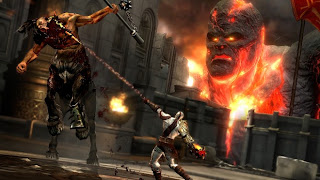 Above: Acceptable penetration, according to the ESRB.
God of War III is a game that does not flinch away from violence. So far I've disemboweled centaurs and decapitated minotaurs. I've pulled out a titan's cracked fingernails. I've chopped off the legs of Hermes so I could wear his boots. I've yanked off Helios's head, and now I'm using it as a lantern. I've pummeled Hercules in the face until his head was shaped like a crescent moon. And it's all been shown in center stage, brightly lit and highly detailed. It's as though the developers are daring you to see how much gore you can take.

Then, when Kratos falls into bed with Aphrodite, the game gets downright bashful.

Don't get me wrong, I'm not saying I wanted an X-rated, fully rendered sex scene, nor do I think that God of War could have or should have tried to pull off a tasteful one,* with the more explicit maneuvers obscured by professional draping techniques. I can't believe I'm saying this, but it's true to the character that we weren't treated to a soft-focus sex scene of the kind you see on late-night Cinemax.

It's just that the contrast is so stark. God of War III rubs your face in gore from start to finish. Bones crack. Bloud spouts. Entrails festoon the columns. You see some jiggling breasts, as well, which give a whole new meaning to the phrase "bump mapping," yet the second Kratos tries a little tenderness, the camera drifts away to focus on two of Aphrodite's young (and female) pages, who watch intently.

Like most of the more dramatic game actions, the sex scene happens through button prompts, here accompanied hilariously by the grating, metallic sound of a sword being unsheathed. Match the prompts, and the voyeurs murmur with pleasure. Miss them, and they look away in disgust. It's funny, probably intentionally, but one gets the impression through much of the rest of the game that we are supposed to be taking the violence seriously on its own terms.

It's a tricky balance, because I'm not suggesting that God of War is intended as a serious dramatic work, like Heavy Rain. It is obviously supposed to be ridiculous and over the top. Still, we are meant to be in awe of Kratos's earthshaking rage. The game dares us to look unflinchingly at one blood-soaked act of brutality after another. But as soon as Kratos thinks about touching a woman, we can titter and turn away. We're like little boys who play with toy guns all day and then giggle when our parents kiss each other hello.

*"Pull off a tasteful one" might have been something users would have tried to do upon encountering an HD sex scene.
Posted by Mitch Krpata at 9:00 AM

The difference is having a Mature title that you can sell versus an AO-rated game that no reseller will go near (Walmart, I am looking at you).

Can't really fault the developer for seeing where the money is.

"We're like little boys who play with toy guns all day and then giggle when our parents kiss each other hello."

I agree with Stray Neutrino. I can see why the decision was made. This underscores the wacky sense of values we have (in the US, at least) regarding sex and violence. I have a friend who will let his kids play GOW, Halo, COD, etc, but does not let them play games if there is a little cleavage or sexual innuendo involved (I remember that Kameo was a no-no because the fairy was just a little too sexy).

In my mind, the depiction of blowing the brains out of someone with a gun is much more obscene than any type of consensual sex. Someone smarter than me has probably already written a treatise on the subject.