Games of the decade: Fallout 3 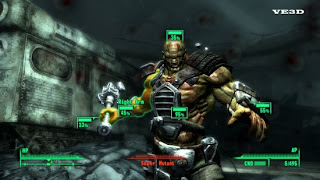 Fallout 3
(2008, Xbox 360, PlayStation 3, and PC)
I tried so hard to be a curmudgeon and hate Fallout 3. Western RPGs have been my downfall for so long (and continue to be). Fallout 3 seemed like any other. Lots of choices about character builds that seemed to matter greatly, and even more choices about character appearance that didn't matter at all. A severely limiting inventory. Quests objectives that are, at times, downright stupid. The notion of guzzling irradiated water in order to help an NPC with her book was almost enough to get me to quit playing after the first couple of hours.

Why did I stick with it? I wasn't reviewing the game. Nobody was forcing me to play it. I could have stopped whenever I wanted. I kept playing, in those early hours, for the setting. A post-apocalyptic wasteland seems like such an unimaginative setting for a video game that you might forget how stunning it can be when it's done well. And it may never have been done better than in Fallout 3.

The moment when you step out of Vault 101 for the first time is one without compare. The screen turns blinding white for a second, to show the effect of natural light hitting your eyes for the very first time. Shapes and colors come into focus, and on the horizon you see the devastated ruins of Washington, D.C. It is a perfect moment. And though you'll never have that sense of wonder again, the map is constructed so that, at all times, you can see at least one other point of interest, and usually more. Resisting the allure of so many historic buildings and sites is impossible.

Even better, the stories within these buildings almost all stand on their own. While the main quest line is interesting enough, the subquests and side stories are the most compelling part of the game. Some of them are silly -- I still cannot get over having to steal the Declaration of Independence for a robot wearing a powdered wig. Some are strangely affecting, like "Agatha's Song," and some are terrifying, especially the trips into the other Vaults. None affect the central thrust of the storyline, and yet, without them, the main storyline wouldn't matter so much. Lots of games tell you that you're saving the world. Fallout 3 is the one that truly gives you a world to save.

I can't say I didn't enjoy this game, but for reasons I can't entirely explain I liked the first two better. I suppose part of it is the world. Despite Fallout 3's world being more immersive, the early games' world is more endearing somehow. I got attached to those characters, particularly the minor ones, much more so than I did in Fallout 3.

Not that Fallout 3 wasn't a great game, and I would probably put it on my favorites of the decade myself if I were to make one, but it's a lot different from its predecessors. I probably wouldn't have any reservations about Fallout 3 at all if it weren't called Fallout, or at least if it weren't numbered.

Few games are as amazing as Fallout 3. I never completed the first two games and compared to something like the Baldur's Gate series, they seemed clunky.

Regardless, Fallout 3 is a game I spent over 200 hours playing and completed three times. I would gladly return if Bethesda would only release more DLC...

I guess I can wait for FO New Vegas.

It's a shame, in light of these impressive design elements, that the PlayStation 3 version is shockingly inferior to the others from a technical perspective.

Im crazy about Fallout 3 I lost myself in the game.

The PS3 will have a much longer breath... this has been said so many times before.. but the ps3 hasn't shown his true colors yet.
I am not a fanboy btw. :)