Games of the decade: Uncharted 2: Among Thieves 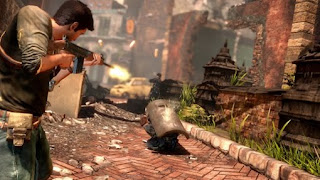 Uncharted 2: Among Thieves
(2009, PlayStation 3)
Trying to evaluate a game's historical significance in real time is not only difficult, it's impossible. Make a grand proclamation and you'll likely be proved wrong. Miss a new trend rushing at you like a tidal wave and you're myopic. Even superlatives of the "best console exclusive yet" are likely to be outdated within a year. No matter what, the most likely outcome with these kinds of statements is that you'll look foolish.

So we won't try too hard to build up the achievement of Uncharted 2: Among Thieves. And we shouldn't need to. This is a game whose considerable merits can speak for themselves, thank you very much. A robust single-player adventure featuring a diversity of environments and play types, it also benefits from a streamlined interface and a zen-like focus on the part of its designers. This is a game with nothing out of place. Everything in it is there for a reason, and I have to think that Naughty Dog's cutting room floor is knee high with discarded prototypes that they loved but couldn't fit into the final product without compromising.

Such great gameplay is matched by a great script. Nathan Drake is an appealing lead, although I have to say that his constant quipping didn't endear him to me quite as much as I think it was supposed to. The supporting cast is what really stands out, in particular the two female characters. They're both treated as Drake's equals, with goals and inner lives of their own. Refreshingly, at no time did they get catty in a fight for his affections. The way in which Chloe gives up Nathan as a romantic partner is a mature and honest moment that's unusual for a game. Honestly, if there's one way in which Uncharted 2 does end up influencing future games, let it be this.

More on Uncharted 2: Among Thieves:

Your perspective of Chloe's giving up Drake was an interesting one. I wonder, though, if in fact it was just kind of a lame way to keep Drake from having to make a real decision. I mean, let's be honest: Drake is great at being an action hero, but he was notably passive when it came to relationships - very much a "go with the flow" kind of guy.

Chloe "letting him go" just made me groan, because it meant that Drake never really needed to choose between the two girls (and more importantly, two ways of life) and was instead just given his answer outright.

Other than that, I loved the portrayal of these characters.