Games of the decade: Ico 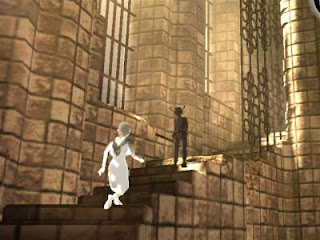 Ico
(2001, PlayStation 2)
I came to Ico late in the game. I remember seeing it in stores when it was first available, and being vaguely aware that the reviews were good, but the cover was boring and there were more exciting things to buy. By the time I realized that I might have missed something special, it was no longer available new. I bought a used copy for $20, finally getting around to playing it in a single sitting in 2006 or 2007. I had already played Shadow of the Colossus, so I expected great things. I was not disappointed.

Ico is a great example of the "less is more" philosophy of game design. I'm not referring to its length, but to the simple list of commands that you can give to your character, and the extent to which it wrings so much drama and emotion from so little. The setting, a massive, windswept castle, is lonely and intimidating. It doesn't need fire pits and rotating platforms when a simple fall down a sewage pipe will do. The platforming is more about exploring than about facing danger, although there is plenty of that, too. Despite the presence of scary smoke guys, and then a final boss battle, the castle itself is the foe. It's a character, every bit as much as Ico or Yorda.

And the simple interaction between Ico and Yorda tells an entire story without words. She is so helpless, but because she doesn't complain or incessantly call out to him for help, she avoids coming off as annoying, as characters in escort missions so often do. She cuts a quiet and tragic figure. Although Ico is ultimately a heroic tale, it is more simply a parable about the tragedy of loneliness and the necessity of human connection. It's beautiful.