Games of the decade: Burnout 3: Takedown 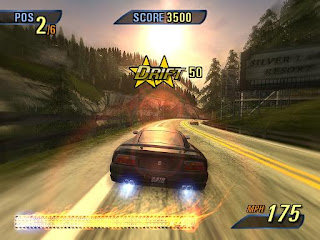 Burnout 3: Takedown
(2004, PlayStation 2 and Xbox)
One of the first games I reviewed for the Phoenix was Burnout 3: Takedown (ignore the dateline; it actually went up in the late summer of 2004). It was also the first time I would experience what is, hands down, the worst part of this job: having to immediately move on from a great game to whatever the hell is next. Since I had rented the game from Blockbuster rather than get a review copy, I couldn't even run a race or three in my spare time. For the next three months, I kept talking about how great Burnout had been, and how much I wished I was playing Burnout right now.

Providing me with yet another reason to eventually marry her, or maybe just to shut me up, my girlfriend got me Burnout 3 for Christmas. Since then, circumstances have evolved to the point where the last thing I need for Christmas is another video game, but at the time it was the best present I could have gotten. I poured myself into that game, playing for hours at a time. I've come to think it's the best racing game I've ever played. It has everything: the dizzying speed of F-Zero, the intuitive handling of Daytona, the over-the-top carnage of Twisted Metal. Spectacular, clear graphics. Tons of tracks. Numerous game modes. On and on.

The inclusion of aftertouch control, which lets you steer the flaming wreckage of your car into the paths of oncoming racers for a takedown, is one of the smartest game design decisions I've ever seen. It transforms crashes from a simple failure state into an integral part of the gameplay. Between the speed and the road rage, it's very easy to crash in this game, but it's almost never annoying, because aftertouch keeps the race moving forward. That's important.

Everything here is about making you go faster. You won't win without using boost, and you earn boost by doing the craziest stuff imaginable, like going off jumps, drifting, driving in the oncoming lanes, and, yes, using boost. But nothing fills your boost meter like a takedown, and forcing your opponents to crash is one of those game mechanics that works absolutely perfectly. You can tell when your momentum will bulldoze somebody off the road, or when you'll need to duel for a good quarter-mile or so until somebody gets the upper hand.

When you do take someone down, the camera angle cuts to a Matrix-style slow-motion shot of their destruction, before returning you to your car, still racing the course at top speed. How does this work? Why do the takedowns seem fresh and exciting every time, without ever growing repetitive? How is it that you're never disoriented when you're back behind the wheel? As with how many licks it takes to get to the center of a Tootsie pop, the world may never know.

I worked at a Game Crazy when this was released. It's amazing that this game did not get the entire staff fired, because we did not get a damn thing done with it around.

this was my favourite burnout! shit yeh i played it for weeks straight lol