Games of the decade: Rock Band 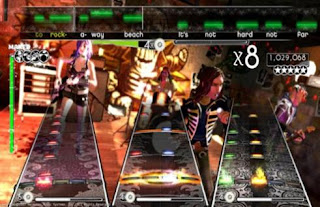 Look, Guitar Hero was incredible. I will never forget what it felt like the first time I played that game. That's not the same sensation I got when I first tried Rock Band, where I knew what to expect. But Rock Band has so much more to offer. The satisfaction of reaching expert difficulty on the drums was much deeper than it was for guitar, because, damn it, it really was like playing the drums! The singing component opened the game up to players who felt uncomfortable trying to handle the game controllers, even as user-friendly as they were.

And the tracklists are just great. Money talks, and the massive commercial success of Guitar Hero paved the way for more songs and more master tracks. Here's another place where Rock Band and Guitar Hero diverge: while GH pursued chart-toppers, Rock Band went for quality, showing what Iroquois Pliskin called "a curatorial esteem for musicianship above other factors." I have gotten into more new bands thanks to Rock Band than at any time since college. The game has made me appreciate classic bands I'd overlooked, while introducing me to current artists I might never have heard of.

More important, it has made me a more active listener of music. Used to be that I mostly heard whatever was more prominent in the mix, the singer's voice or a guitar solo. Now I can pick out bass lines, and understand drum parts. In the course of listening to a song I can dissect it and put it back together again. This is an ability I've never had before. When I hear people warning that music games are eroding our appreciation of music, I have to laugh. It's exactly the opposite.

Great blog you got here. I'd like to read something more about that matter. The only thing it would also be great to see here is some pics of some gizmos.
Katherine Watcerson
Cell phone blocker