Games of the decade: Far Cry 2 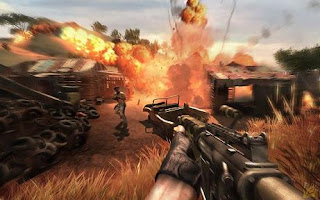 Far Cry 2
(2008, Xbox 360, PlayStation 3, and PC)
I thought a lot about Far Cry 2 while I was playing through the Modern Warfare 2 campaign. Their approaches couldn't be any more different. MW2 leads you like a dog on a choke chain, viciously correcting you every time you stray off the pre-designated path. Far Cry 2 lets you wander and explore, and take time to plan your next move. It's slow-paced, almost meditative at times. Yet compared to the overstuffed plot and sloganeering of MW2, Far Cry 2 is the game that truly leaves you thinking that war is hell.

The dynamic approach means that Far Cry 2 is brimming with indelible moments that will happen to you and only to you, and which resulted in many players sharing their war stories as though they were real memories. I lost track of how many times I thought I'd planned the perfect assault, spending ten minutes or more skulking through the tall grass like a lion, marking all the enemy emplacements on my map, only to see it all go to hell once the first shot was fired.

Things in happen in Far Cry 2 that you can never account for. Weapons jam and misfire. The winds change, spreading fire back toward you instead of toward your foes. Enemies happen upon your rear flank by chance. Things can go disastrously wrong, or gloriously right. Though all these factors play into how the game develops, ultimately it's you, the player, who authors the experience. You don't have to do things in a prescribed way.

We all have our war stories. My favorite is a very simple one. I was on a mission at a train depot to destroy a tanker full of fuel. The depot itself was bustling with enemy activities, but I'd found my way to a ridge overlooking the place, right on the edge of the woods. From my perch there was a straight shot to the tanker. Perfect chance for a hit and run. I steadied my rocket launcher. Once I fired, I planned not even to stick around for the fireworks. I would disappear into the woods as quietly as I'd arrived.

It would have been a great idea if the weapon hadn't misfired. When I pulled the trigger, the rocket flopped onto the grass in front of me, smoking and hissing. I don't know what attracted more attention, the explosion or my hasty retreat down the side of the mountain. What had started as a surgical strike suddenly became a Black Hawk Down-style shootout. But I still had another rocket and some of the enemies, incredibly, were still hanging out next to the tanker. The explosion rocked them sky high, and when it was over, there was only silence.

I wasn't in love with Far Cry 2, but I appreciated it nonetheless. Funny though, that I remember exactly the mission you're talking about, because I approached it exactly the same way. Only for me, it worked. I destroyed the tanker and everyone around it with almost no effort, and fled before anyone knew where I was. It was probably the easiest mission in the game for me, and I couldn't believe I got away with it.

Almost makes up for all those deaths at checkpoints along the roads I suffered not during, but simply on the way to, all the other missions.

Am I mad to feel the call of the game even now? What a cool anecdote.

I thought that Far Cry 2 was underrated. It's by no means a perfect title, but it's one of the few games that captures the chaos of a firefight gone wrong. I'll be revisiting it during the xmas break.

The guard checkpoints did get pretty old about halfway through the game, though...

It was extremely interesting for me to read the article. Thanks the author for it. I like such themes and anything connected to them. BTW, why don't you change design :).