Games of the decade: Guitar Hero 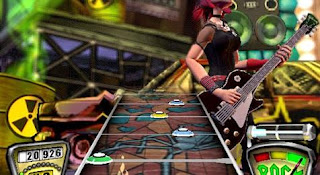 Guitar Hero
(2005, PlayStation 2)
Guitar Hero II
(2006, PlayStation 2; 2007, Xbox 360)
Do you remember how silly Guitar Hero seemed? How risky? Peripheral-based music games had always had a place as a niche product. Even games as commercially successful as Dance Dance Revolution weren't taken seriously as members in good standing of the video game fraternity. Guitar Hero was such an iffy bet at the time it came out that we didn't even make an effort to review it for the Phoenix.

It was my good fortune, though, that the Phoenix's Camille Dodero just happened to write a feature on Harmonix at the time, sort of a "local boys make good" piece, and as a part of it she got a free copy of the game. Except she didn't want it, so she foisted it off on Ryan, who works there and blogs for the Phlog and Laser Orgy, and who was my roommate at the time. So it was that on some random December night, he walked in the door with this box under his arm, feeling sheepish for having carried it on the T. Graciously -- or maybe because we both still thought this whole thing looked pretty dumb -- he let me have the first go of it.

From the first note I strummed in the tutorial, I could tell that Guitar Hero was a hell of a lot more than what it seemed like. It all came together perfectly: the snap of the strum bar, the give of the fret buttons, the wail of the note. Playing something in this game gives you a feeling of power and creation. You can describe it to somebody all you want, but until you put the guitar in their hands and let them experience it, they'll never quite get it.

We traded off songs all night, each of us leaping off the couch when it was our turn to play. We didn't think at the time that we were witnessing the leading edge of the zeitgeist. Even then, if you'd asked me to predict the future of music games, I wouldn't have thought they'd become as successful, and eventually as over-saturated, as they have. I wouldn't have thought much of anything beyond what I was thinking then: this is awesome.

Years later, I still think that.

I was as blindsided as anybody that GH made music games popular, but I was one of the few people that actually anticipated the game with excitement. I'd been playing music games since PaRappa. Frequency is in my top 10 games of all time list, and I was a certifiable DDR addict for a while there. I took one look GH on the upcoming releases list and said to myself "This is Harmonix doing Guitar Freaks. HELL FRICKIN YES."

Anybody who makes a top 10 games of the decade list and leaves this off is deluding themselves.