Games of the decade: God of War 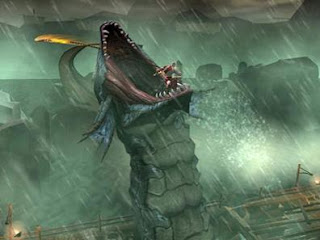 God of War
(2005, PlayStation 2)
God of War II
(2007, PlayStation 2)
God of War was one of those games I missed out on the first time around, only to pick it up for $20 a year later and feel dumb for having waited so long (but not, it should be said, for saving $30). My memories of the game are actually a bit hazy, because I was drugged out of my mind at the time. I'd gotten my wisdom teeth out, and with several days in front of me with nothing to do, playing a video game seemed like a great idea. Well, it was, and it wasn't.

On one hand, God of War is trippy enough visually that you don't need the aid of powerful painkillers, but it certainly doesn't hurt. Massive boss fights, especially the opening battle against the Hydra, set a standard for PlayStation 2 visuals that were never surpassed, except possibly by the sequel. Your standard fights were hectic, button-mashing affairs, with tons of enemies onscreen at all times, and seamlessly integrated quicktime events, in which Kratos dished out his most brutal punishment. And the environments were terrific, especially the descent into Hades, which looked agonizingly painful.

On the other hand, God of War is an extremely difficult game, especially during certain platforming segments, and when you're not in full possession of your faculties, trying to walk on a spiky, rotating log across a pit of fire is not the easiest thing to do. You would think, given my incapacitated state, mouth stuffed with gauze and all, that I would not have been able to scream and swear and throw my controller. You would be wrong.

Often I hear people talking about a game that is difficult but fair, and rewarding when you beat it. It's something I appreciate in theory but have a hard time dealing with in practice. God of War is as close as it gets, though. It's not insurmountable, although I do seem to recall accepting an offer to dial down the difficulty. And it has a great story, with a character whose actions mesh with his personality, unlike the genocidal everymen who populate so many action games.

God of War II I played stone-cold sober, and I loved it, although by that time I was starting to wish the game would stop sealing me into rooms with dozens upon dozens of enemies. Hopefully God of War III keeps things moving more briskly, or I might be in the market for some percocets.

More on God of War:

Labels: Games of the Decade, God of War, God of War II, PlayStation 2

That's just creepy. About 2 years ago I got my wisdom teeth pulled, bought GOW for 20 bucks on the way home, drugged up, and played it til I passed out. I screamed at my television all the way through Hades. I thought I was going to commit suicide trying to get up that last blade log that you had to climb.

By the way, great blog. Always a pleasure to read.

those rotating spiky log things drove me nuts! Ive only played GOWII but i thought it was awesome.