Games of the decade: Resident Evil 4

The last of a series of subjective looks at my favorite games of the decade. 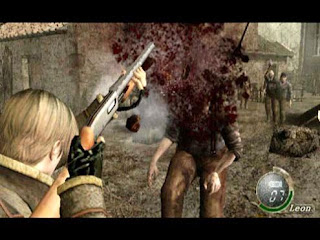 Resident Evil 4
(2005, Nintendo GameCube and PlayStation 2; 2007, Wii)
In the five-plus years I've been reviewing games, I've given a score of 10/10 on four separate occasions. Two of those were for Resident Evil 4. No, it's not perfect, in the sense that no game ever could be, but in all the ways that matter, it is my idea of a perfect game.

I had been a fan of the Resident Evil games going way back, but by the time I played Zero I felt that the franchise was more than out of gas. I put about three hours into that game and couldn't summon the will to go on. It was impossible to ignore the positive buzz building around the fourth installment, but even so, I went to Best Buy and picked it up because we needed something to review, not because I was expecting anything earth-shaking.

My blase attitude lasted about five minutes, by which time the game's opening sequence fairly well blew it away. There's a little bit of ominous lead-up to the real opening sequence. First Leon is abandoned by the unfriendly local cops, then he encounters a crazy man in a farmhouse, then he sees one of the cops being burned at the stake in the town square. It is all creepy and very well done. But it still doesn't prepare you for the onslaught that comes next.

Years later, my head still spins when I remember that opening shootout. The designers played me like a fiddle. They showed me Leon pushing a bookcase in front of a window, and so I understood that I could use the other furniture to barricade myself in. I felt very pleased with myself, listening to the plagas struggling on the other side of what I presumed to be sturdy, artisanal furniture, and I don't know why I didn't realize that they could break through it until they did.

So I ran upstairs, where I was again surprised by the sight of plagas clambering in through the windows. Here's where the interface came into play: any time Leon was near an interactive object or location, a button popped up letting me know. So I leaped out the window, darted across the courtyard, and climbed a ladder onto a rooftop. The big button appeared, informing me that I could knock the ladder down. "This is too easy!" I thought. I ran to the other side of the roof and kicked down another ladder. "I'll just stand up here and pop them all in the head."

As I turned back around, ready for the turkey shoot, up came the ladder I had just knocked down. That's when I knew this game had me completely. And that's before the chainsaw guy showed up!

The crazy thing, though, is that RE4 never slowed down from there. It raised the stakes at every turn. More impressively, it finagled endless variety out of a streamlined interface and a limited moveset. Leon couldn't do very much: he could run, aim, and shoot, or he could performed those predetermined contextual actions. From this Resident Evil 4 presented one inventive setpiece after another, never repeating itself, and often exploiting the player's own laziness. You beat the first El Gigante, and later the game sics two of them on you. One is easy to dispatch by dropping into a pool of lava, and if you're like me, you're feeling relieved at this point that you know how to kill the second one. Except, oops, now the lava pool is sealed shut.

In the end, that might be what makes Resident Evil 4 so great.* At every stage, Capcom carefully sets your expectations, and then swiftly knocks them down. Playing this game is like going up against a great poker player: he knows exactly what you're holding, and how to fool you into thinking he's holding something else. Except in this case, you're the one winning the jackpot.

*N.B. I've been trying to explain for almost five years what makes Resident Evil 4 so great, and I don't think I've gotten it right yet.

One other important facet of RE4 for me was that it just kept coming. Every time I thought I'd seen everything, it threw something new in: the sea-change when it becomes a bad idea to headshot enemies; the regenerators; all the little setpieces.

And the environments! So many unique environments; I kept expecting them to reuse tilesets and they just kept cranking out new artwork. As a result, the distance I travelled in the game - village to church to castle to lab to cliff - felt massive, just because there was no repeated ground.

It also felt like they'd found new inspiration. The Romero movies were great inspiration for the early games, given the limited platforms they ran on; for the GC/PS2/Xbox era, something pacier was possible, and IMHO the massive debt RE4 owes is to John Carpenter. Carpenter's action-packed take on the thriller - Assault on Precinct 13 - and grizzly take on action-horror - The Thing - seem like ideally influences for an RE game, and they're played so well in RE4.