Games of the decade: Crackdown 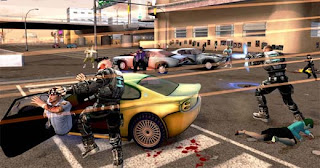 Crackdown
(2007, Xbox 360)
The funny thing about Crackdown was the desperate ploy Microsoft used to sell it. The game came with a code to access the Halo 3 beta, and while it might be easy to forget now that everybody loves Crackdown, at the time the beta was all anybody was talking about. It's even easier to forget now that Crackdown didn't really blow people away at first. A Metacritic score of 83 is good but not great. Most of the complaints seem to be that it's too short lived.

This is why making predictions is a bad idea. Years later, Crackdown is one of very few non-new games that I still take the time to play, and so do some of the people I see on my Live friends list. Yes, you can bomb through the campaign in a relatively short period of time, and powering up your character all the way isn't too arduous, but it seems to me that those reviewers were discounting the staying power of Crackdown's most enjoyable feature: the platforming.

If there were nothing to do in this game except climb buildings looking for agility orbs, it would still be more fun than most games. It's that good. (Unfortunately, I'm still looking for one last agility orb, and the accompanying achievement. Alas!) In the time since it came out, there have been plenty of other games that tried to give you a similar freedom of movement, inFamous and Prototype chief among them, and none of them managed to replicate Crackdown's joy of movement. Every game designer should give his game this test. If you remove everything but the action the player will be performing more than any other, is it still fun?

i'm playing x-box . but i dont see any game with this title . where can i ge it . from the picture it look so realistic .

I did really enjoy crackdown. One of my best surprised in 2007.
Yesterday when i saw you ranked "Borderlands" I have to say I was surprised. Reading your little speech about it even made me more surprise.
I have a very big compalin about borderland: It is really messy. I have reach level 30th without really knowing what i was going through. It was all about hearing bullets flying around, go to point A to B back to A, and staring at my xp bar when i was getting close to the end. Don't take me wonrg, it is really good, but I would hjave not put it in the decade list.

Crackdown take for me all the credit of crackdown ( at a decade point of view):
- Ability to play in coop (online or not) with your friend in an "adventurous" game
- Upgarde of your capacity ( can be compare to the Xp system) and what it unlocks in the world.
- addiction to the gameplay

Those are the cores values of those two games. Borderland is a little bit more polished, I give you that; but in a decade point of view I think the step (in my subjective heart) was climbed by Crackdown.

that said, Keep on posting! :)
Quiche

I hadn't even heard of Crackdown until the Halo 3 beta news broke. I downloaded the demo after that, and played it for the hour or two they let you at least 4 times, then went and bought it on day one. After exhausting the single player, I ended up spending another month playing it co-op. What finally killed it for me was the DLC, it caused some bug that corrupted my save. I only had like 3 agility orbs left and didn't want to start over. I still own it though, maybe one day.

Also, I think Prototype did a pretty bang up job of recreating and maybe surpassing Crackdown's joy of movement. Crackdown was far and away the superior game though. The last third or so of Prototype can go to hell.