Games of the decade: The Darkness 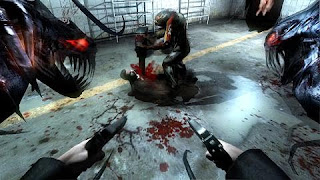 The Darkness
(2007, Xbox 360 and PlayStation 3)
Playing The Darkness was the best kind of gaming experience to have. I went into it with no expectations, was impressed from the start, wondered how it would screw up, and gradually realized, to my delight, that it wouldn't. We reviewed it for the Phoenix because it was June, and it was a shooter, and what the hell else were we going to do? Certainly the game sounded stupid: you play as a hitman, Jackie Estacado, who's possessed by a demon. That was all I knew, and it didn't seem necessary to know more.

From the start, you realize something a little more is happening. The Darkness throws you into an action scene -- you're sitting in the back of a convertible, speeding through a tunnel away from the cops, and a compatriot hands you a gun and directs you to start shooting. This sets the tone for the rest of the game: you're in control of your actions, mostly, but at crucial points someone else is calling the shots.

The surprises don't stop. The Darkness gives you quiet moments, such as the famous scene where you sit down with your character's girlfriend and can watch the entirety of To Kill a Mockingbird on television, if you choose. And there's the walk through a burned-down orphanage, where ghosts of Jackie's past are literally all around. Twice, Jackie dies and visits this game's version of Hell, a supernatural, World War I-like landscape, where the tormented soul of his grandfather struggles to free Jackie from suffering for his sins. This is a game suffused with sadness, memory, and regret.

Maybe the best thing about the story is how small-scale it is. The plot is essentially one of macabre one-upsmanship, with characters taking increasingly brutal revenge on one another for a perceived personal slight that happens before the game even begins. The fate of the world doesn't hang in the balance, and Jackie has no interest in saving anyone -- not once that option is removed from him, anyway. This is a story of two people who hate each other, and who will go to any lengths to destroy one another, even at the cost of their own souls.

Then there's the Darkness itself, a fascinating creature voiced with ferocity and intensity by Mike Patton. It makes its intentions clear from the outset: it wants Jackie's soul, and will stop at nothing to acquire it. It will help him pursue his own goals in exchange, but its self-interest is never in doubt. Even as its tentacles feast on the hearts of his enemies, it gives him nothing, and takes from him everything.*

One of the markers people who don't understand video games like to throw down for the legitimacy of the medium is the question of when a game will make somebody cry (never mind that many games already have). I won't go so far as to say that The Darkness made me cry, although it did make things a little dusty in my apartment. But it definitely made me feel something -- many things. I felt sadness and rage. I felt genuine affection for a virtual character, every bit as much as I have for characters in books and movies. I felt, when it was over, like I'd experienced something I would never forget.

More on The Darkness:

Labels: Games of the Decade, PlayStation 3, The Darkness, Xbox 360

Mitch,
I think this short article makes the game sound better than any review ever could. I'm going to have to go back to check this one out.

Mitch, your championing of this game has worked on me - it really seems like a gem that I overlooked, so thanks.

Plus, it's like $7 on half.com right now, so when the games onslaught ends and I have a spare few hours (which, at the rate things are going, will be in like 2011), I'm totally gonna check it out.

And who knew that Patton would find an outlet for his vocal craziness in games? I just IMDb'd him, and while I knew that he was in the Left 4 Deads and The Darkness, I did not know that he voiced the main character in the Bionic Commando remake, or that he was the Anger Sphere in Portal (though if I'm remembering that thing correctly, it was pretty clearly him).

YES! I'm both surprised and very happy to see this on here. The Darkness has the best story of any game I played in 2007. And yes, I'm aware the Bioshock came out that year.

Yes, the gunplay wasn't that tight, and yes the multiplayer was a joke. But who cares when the narrative and sense of place are this brilliant?

I thought the game was pretty average, apart from the excellent scene you mentioned between Jackie and his girlfriend.

If I remember correctly, there were two main issues I had with the game: one, the gameplay/shooting/supernatural mechanics were clunky; two, I thought that Jackie was a pretty lame, goofy character.

I'm so glad you mentioned this game in your best of the decade compendium, because I couldn't agree more! I rented this game a little after it came out, and it was a great surprise. For some reason, I can't quite explain, this is one of the games I've felt the most immersed in its story.

The story is not really epic, but for some reason, it is compelling. Like, you feel it at some level... somehow you're able to see what he sees, and you want to take part on his revenge... and at the same time sense the struggle with the darkness. What a great game!