Games of the decade: Half-Life 2

Part of a series of objective looks at my favorite games of the decade. 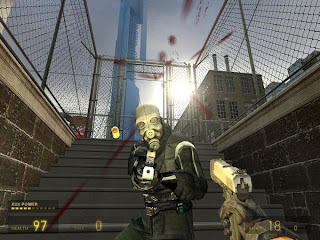 In 2004, my 1999-vintage PC was starting to show its age. I'd gotten a beastly Alienware machine as a high school graduation gift, which had served me well for most of its lifespan, but it wasn't up to the task of running two new games I desperately wanted to play, Doom 3 and Half-Life 2. Unfortunately, I was dead broke. And even as the word on Doom 3 was less than stellar, by all accounts Half-Life 2 was a once-in-a-lifetime kind of a game. Still I put it off.

By winter of 2005, things had gone from bad to worse. My computer was infected with malware and viruses, and had become all but unusable. I needed a new one, but my budget was tight. I couldn't buy a new one. I couldn't even pay it off in installments without cutting something from my monthly expenses. After I ran the numbers, there was only one conclusion: I would have to quit smoking.

I finished the pack of cigarettes I was on, and ordered the computer. Somehow, seeing the cost in such stark terms made it -- well, not easy to quit, but not that hard, either. And by summertime, when I saw Half-Life 2 on the shelf at Target and remembered how important it had been to play it, I could even afford that, too.

And, as you know, it is so good. The original is still a masterpiece of self-contained B-movie storytelling, but the sequel broke ground with its more ambitious and ambiguous narrative. Gordon Freeman has gone from a plucky survivor to an unlikely messiah figure, and the threat has shifted from icky creatures to a totalitarian occupying force. Half-Life 2 is creepy, both in ways that make your skin crawl, and in ways that poke at your conscience.

It is also, at its most basic level, one of the most deftly engineered action games ever made. The optional commentary tracks on the later Half-Life 2 episodes are illuminating, and dispel any notion I may have had that the team at Valve had somehow lucked into the quality of their games. No other developer is better at tricking you into doing exactly what they want, while making you think that you're the one at the wheel. Half-Life 2 is chases, shootouts, and everything else exciting you could want from a game, all performed at the highest level.

In subsequent chapters, Valve has added new twists without taking away from what made the first game so great. The culmination of Episode Two, a massive battle sequence against the beastly striders that makes heavy use of both driving and the gravity gun, may be the series' high point. I expect even better from Episode Three.

So thanks, Half-Life 2. This January will mark five years since I stopped smoking. When I'm not dying of lung cancer at age 60, I'll play this game, and I still won't be able to breathe.

Episode 2 had a great cliffhanger to it. If only they'd get their arses in gear and make the final third episode.

There is no game I want more these days than Half-Life 2: Episode 3. When it finally has a release date I'll of course replay all the games from start to finish. Storming the beach with the ant lions in Half-Life 2 for the first time is one of the most vivid action game memories I have. Everything after that, really, has yet to be beat by another game. Call of Duty 4 did come close though.

I guess this could go in the "gaming made me" list, although it was not the game itself for it's story, rather than it's price and all that took for you to play it, but it's actually intresting how this sort of things affect the way a person takes choices.

It's funny that HL2 was a major part of your motivation to quit smoking, because the HL2 series is what I played when I was knocking off cigarettes.

I was back in Wisconsin after a tough summer in Boston, and suddenly cigarettes didn't taste good anymore. I'd been hot and miserable for three months in Cambridge, and I couldn't light up a Lucky without immediately feeling like crap. On the other hand, I couldn't get through the morning without a cigarette: if I didn't smoke, I got brutal headaches and crippling lethargy.

But when I smoked my last cigarette and went back inside my apartment, I just sat down and started playing through the entire series again. It was my second or third complete playthrough, but Half Life 2 and its episodes are like great movies or books. I know them backwards and forwards, but somehow there's always something else I didn't notice. Something new to surprise me.

I played them, along with a couple other games, for a few days straight and somehow I never noticed the nicotine cravings or the withdrawal headaches. I was too preoccupied being astonished all over again at the Ravenholm sequence, the chaos of Nova Proskpekt, and just about everything in Ep. 2. By the time I reached "fade out" on the end of Episode 2, I no longer felt any need to for cigarettes, and all sluggishness that I'd come to associate with addiction was cleared away.