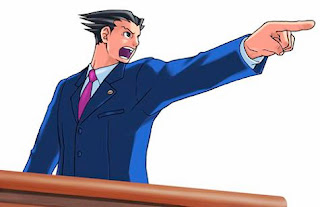 And why not? With its sharp writing, hilarious dialogue, and challenging but logical puzzles, the Phoenix Wright series is the true heir to the LucasArts throne. The discovery phase of gameplay, in which you walk around the crime scene looking for clues and talking to detectives, is just like something out of Monkey Island. And the trial scenes are thrilling, which I never would have expected when I first heard about the game. The driving music and anime-inspired backgrounds when the testimony gets heated makes these sequences as exciting as any shooter I've played.

In the end, what really sets Phoenix Wright apart is the strength of its protagonist. We've gotten used to playing games as macho superman whose only flaws are that they just care too much, damn it, and while Phoenix does value truth above all else, he's also a self-doubting wimp. He openly sweats during cross-examination, usually appearing more nervous than the witness he is trying to break down. He frequently requires pep talks from his assistants. In the end, though, his faith in justice helps him to prevail. I love that message.

After all the time I spent jabbering excitedly about Phoenix Wright when it came out in the fall of 2005, my editor asked if he could borrow it. I reluctantly agreed, and then he moved out of the state shortly thereafter. Damn him.

I also enjoyed Phoenix Wright immensely. I can see why it didn't do well critically or commercially, though; it plays more like a movie than a video game. To the extent that it has replay value, it's not so much in actually doing things (because in my experience you'll remember the solutions to almost every puzzle when you go back, even if you don't when you're not playing) but from reading the dialogue and watching what's happening. So I think a lot of people don't really know how to categorize it, and that's sort of scary. I loved the series, though.

Dude. I mondo agree with you to an extreme degree.

<3 Phoenix Wright. It's heavily steeped in anime traditions, which might be part of why it found a relatively niche audience here.

One question though: why is it that only the first two games are listed? Did you not play Trials and Tribulations and Apollo Justice, or did they simply not strike you the same way?

Just never played the others, which is strange given that the first two were some of the BEST GAMES OF THE DECADE.

Kirk, good stuff. I always liked the Fresh Prince of Bel-Air reference in "And Justice for All."