Games of the decade: Portal 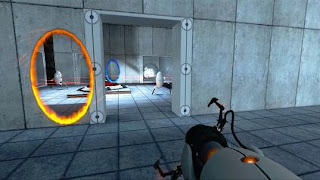 Portal
(2007, Xbox 360, PlayStation 3, and PC)
The Orange Box was a whole lotta game, including as it did a brand-new Half-Life 2 episode, the long-awaited Team Fortress 2, and complimentary copies of Half-Life 2 and Half-Life 2 Episode One, but it was the quirky puzzler/platformer/dystopian-nightmare Portal that made the biggest impact. I was tempted just now to describe Portal as something nobody saw coming, but it's not really true. It looked spectacular in previews, and I'm probably not the only person who fired it up first after putting the disc in the drive.

Still, I don't think anybody expected just how good this game would end up being. The possibilities of teleporting all over the place with a portal gun was sufficient to stoke my interest, and on this count Portal is plenty successful. Most puzzles can be solved with the same basic trick, in which you build up your momentum by falling from floor to ceiling a couple of times in one smooth motion, but there are plenty of surprises. One segment in particular, where you bounce up and down between floating platforms, opening a new portal at each successively higher one, was the closest I've come to getting motion sick from a game. That's intended as high praise.

The deft storytelling was something I don't think anybody anticipated, particularly via the hilarious and menacing dialogue of your robotic overseer, GLaDOS. So much ink has been spilled in praise of the writing team that I almost hesitate to add to it, but let's be honest here: this is genius-level stuff. For awhile you might not even pay much attention to what GLaDOS is saying, between her boring instructions and your sterile environment. When she starts slipping subtle threats and sarcastic asides into her speeches, you may wonder if you've heard her right. By the time you encounter the weighted companion cube, you start to realize what you're dealing with. No doubt Portal would have been fun even without the story, but would anybody still be talking about it today?

Portal is important for another reason, which is that it proves that a game doesn't have to be 40 hours long to be complete and satisfying. It takes no more than 3-4 hours to beat it, and probably less if you're good at it. Yet it's hard to imagine how it could possibly have been improved. This was a triumph, indeed.

Wow. You actually managed to end with a reference that was neither "The Cake is a Lie" or "Huge Sucess". Well played, sir.

The time based challenges required precision, timing and the willingness to discover every exploit in order to shave off seconds. The least portal challenges managed to create further puzzles within the puzzle and the advanced mode was just the same thing but much harder and thus more satisfying. I have to say that without these modes to play after the story, the game would not be anywhere near as good in my opinion. It was here that I felt as though I was forming creative solutions to the problems rather than just going through the motions (which can be enjoyable but makes up 95% of most gaming experiences).

It's great when there is a hardcore end-game which requires you to recall and expand on the skills you used to beat the main campaign. Mario games usually use this trick. It's often the most rewarding part of a game but it is usually ignored by reviewers and critics.

I actually played this game for the first time just this week. I had heard enough about it that I was ready to be let down, but it seemed to live up to the hype. My only issue is that solving some of the levels involves reflexes and dexterity that I just don't have.

If you're playing on an xbox try it a PC instead. A mouse will give you the control you need to get the most out of this game (or any FPS).

So glad to see this; knowing that you won't be covering most games I'd put in this same category of recognition (WoW, Mario Golf Toadstool Tour) I'd been waiting specifically for Portal as I knew we'd have overlap there.

Excellent description of it. I still find myself telling people to go play it, and I may just point them here instead of babbling for a while.

I'll also second the recommendation of PC over console -- I don't think I'd have had nearly the success I had on a console that I had on the PC, though again that's my non-console-FPS bias showing through.

I'll admit that I was mostly turned off by the extra challenges; the gameplay and dialogue alone were more than worth it for me, and I bought it solo for $20 instead of in the Orange Box bundle.