Games of the decade: Shadow of the Colossus 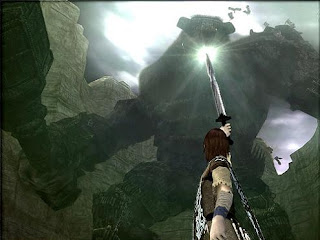 Shadow of the Colossus
(2005, PlayStation 2)
2005 was a big year. In the spring, the Phoenix started publishing game reviews in print, after running them online for about a year. They kicked it off with a cover story in which I reviewed three of the winter's biggest highest-profile releases (which were Resident Evil 4, NBA Street Vol. 3, and Mercenaries -- in retrospect, only one of those was really worth the ink). For all the talk of digital media being the future, or even the present, hard copy lends a certain invaluable legitimacy.

Feeling the pressure of a bigger megaphone, or at least a more prestigious one, I also started aiming a little higher with my reviews. I wanted to talk about theme, and narrative, and meaning. Only trouble was, most games were impervious to this kind of criticism. (Sadly, this is still true.) Shadow of the Colossus, on the other hand, was a game that seemed to be crying out to be taken seriously. I still know of few other games that manage to synthesize such real emotion out of their digital parts.

Reading my review now (sorry for the formatting), it's clear that I didn't quite succeed in that goal, but it's a pretty significant step forward, even if you include all the ill-advised humor and the cringe-inducing closing sentence. This is one of many games it's easy to point to when people question the legitimacy of games as an artistic medium, so much so that it's almost a cliche at this point. But what else can you call it? Games took a big leap this decade, and Shadow of the Colossus was on the vanguard. It was the first of many impressive games in the latter half of the decade that grabbed players by the lapels and demanded that they take accountability for their actions. In some sense, it did the same for me as a reviewer.

More on Shadow of the Colossus:

Labels: Games of the Decade, Shadow of the Colossus

It is still my sincere hope that they release this game in some form for the Playstation 3, like they did with the God of War Collection.

It is my greatest shame as a gamer that I have never completed it.

I remember when it came out and I hadn't heard of it before, but it was a little piece in the Boston Herald saying it was coming out and the description was such that I knew I had to get it. I went out and preordered it. I don't know if that was you or not, but what the hell. Thank you Mitch Krapta for suggesting Shadow of the Collosus.

Unknown said...
This comment has been removed by the author.
1:24 PM

Unknown said...
This comment has been removed by a blog administrator.
1:24 PM