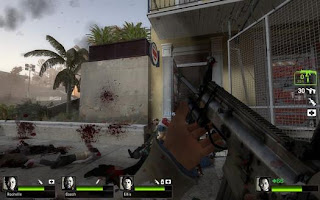 Above: Malls of fury.
My review of Left 4 Dead 2 is up now at thephoenix.com. This is a terrific game, although it's not all on an even keel like the first one was. There are things that are absolutely brilliant, and some things that are kind of frustrating. What was great about the original was how simple it was, almost arcade-like: run from here to here, and shoot this, this, and this along the way. Left 4 Dead 2 adds a lot of wrinkles, many of which are spectacular, but which also take away from the elegance that made the first one so great.

For example, it's pretty cool that now you can choose different types of health items. A medpack lets you heal yourself or an ailing teammate, as before, but you can also choose to carry a defibrillator instead, which will revive a fallen teammate. That adds a layer of strategy that was missing before, but it also means that there will be plenty of times when you're carrying one thing and really need the other. The same goes for the temporary-boost items, adrenaline and pills. Adrenaline can be insanely useful in the right situation, such as when you need to retrieve an item, although the right situation rarely occurs.

And, as I say in the review, the more robust mission objectives are a double-edged sword (or a cricket bat, if you like). As soon as you're doing something besides running, you start wondering why you're doing these things, and most often the answer is nothing more than Valve saying, like an exasperated parent, "Because!" The Dead Center finale is the most egregious example, but even most of the Dark Carnival gives me this impression. On the other hand, Hard Rain is such a great idea that is so well executed, it's worth playing the game for that campaign alone.

Although the voice cast is just fine here, especially Cutty from The Wire,* I really miss Louis. We found ourselves saying things like "Pills here!" in Louis's voice, just so he would know he was loved. Honestly, I also miss the easier difficulty of the first game. Maybe our group is just terrible (okay, I know we are), but it feels to me like easy in the sequel is about equal to normal difficulty in the original, which was plenty hard for me. And this time they've stacked even more levels of difficulty, culminating in realism mode, which I will admit right now I did not attempt.

The Joystiq crew has caught some flak for their review of the game, which focused on nothing but the difficulty, but it's a perfectly valid point. I can't take more than about three resets per chapter before I'm done with the campaign, let alone five or more. The AI director this time is vicious about throwing the special infected at you, and never seems to adjust even if you're struggling. That's not the worst thing in the world, since the actual intelligence director can just switch things down to easy if you have no shame, which I don't. So while I'd take the first game over this one if forced to choose, it wasn't hard to make Left 4 Dead 2 more like the game I wanted it to be, and that game was pretty awesome.

*Be honest here: You would play a Left 4 Dead mod set in Baltimore, with the voice talents of Michael K. Williams, Wendell Pierce, Dominic West, and Felicia "Snoop" Pearson, wouldn't you?
Posted by Mitch Krpata at 1:00 PM

Most of the problems people seem to have with this game (including difficulty and ridiculous scenarios, but mostly difficulty) are solutions to the problems I personally had with the original. The original was too easy. It shouldn't be that simple to blow through a zombie apocalypse. I personally disagree with the idea that the first game was great in part because of its arcade-like simplicity, but I can certainly see where you're coming from when you say that.

This game is different. This is the game I hoped the first one would be. I was disappointed in L4D and in a perfect world I wouldn't have shelled out another $45 on Steam to get this, but I found it completely worth it.

I played the first Left 4 Dead and got pretty good at it (on normal), which makes the difficulty of the second one right in the sweet spot for me. I feel the same frantic sense of barely surviving that I did when I first started Left 4 Dead, only now it's every time I play. The zombie apocalypse is a much scarier place in Left 4 Dead 2, which I take as a good thing.

It lends itself to more of those dramatic "go on without me" moments, and every play session has a real sense of urgency and desperation. I'm into it!

I definitely agree that many of the scenarios are ridiculous. The game is sort of at war with itself: the inclusion of a setting that is actually the site of a major disaster and the new realism mode seem to say that Valve wants the game to be taken more seriously, but other settings are more campy and over the top. Then again, the zombie apocalypse tends to be pretty campy.

Your point about the arcade like complexity is spot on. I loved the first game for the exact same reason - it presented a rarefied space for decisions which meant you could focus on the moment-to-moment decisions like "Do I aim for the head or the chest?"

After spending almost a week playing the game familiarity got me over the initial difficulty with the new choice of items.