Games of the decade: Bully 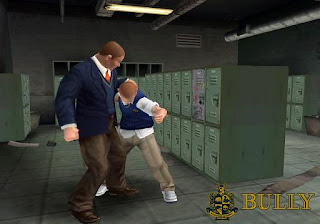 Bully
(2006, PlayStation 2; 2008, Xbox 360 and Wii)
Almost every Rockstar Games release attracts its share of controversy, but rarely have the company's critics played into its hands quite like they did with Bully. The horror, they cried, clutching their pearls. What sort of monsters would create a Columbine simulator, which is obviously what this game would be, since apparently it was set in a school of some sort? These critics didn't know what Bully was, and they certainly didn't care. They just knew that the evil people behind Grand Theft Auto were at it again.

Bully does share structural similarities with GTA, as well as that game's fascination with the underbelly of respectable society, but thematically it's more mature and thoughtful than any GTA game. It's about the soul-deadening effects of conformity, and the perils of blindly following authority. In Bully, it's not the snot-nosed kit who lights bags of his own crap on fire that's the problem, it's the entrenched administration and their lackeys in the student body. In a sense, Bully warns against following exactly the sort of people who would seek to ban a video game without even knowing what it is.

Credit also has to go to the design of Bullworth Academy, and a storyline that follows the course of a normal school year. I enjoyed the way holiday decorations went up and came down as the story progressed, and how friendships and alliances were formed and broken as the semesters went on. The school years used to seem so long while they were happening. Now I can't tell one month from the next. Bully captures that feeling of school as a battle, both literal and metaphorical. Where's the sequel?
Posted by Mitch Krpata at 9:00 AM

I have the 360 version, and I have to say, it did not pull me in. The same thing happened to me with GTA: Vice City. I love open world games...I can't figure out why I don't like these games. Because I feel like on paper, I would.

Mmmm...
Interesting, that is a game I kind of stare all the time i met him in different game shop.
I have to sya that at some point i was interested in it; but even tho some review was like "BAD cause Rockstar" it was kind of tickeling me.
Now what really cool me down on buying it ( or even trying it) was the fact that everyone agree to say it was amazingly Buggy.

It's sad how much Bully has to dwell in the shadow of GTA because in a lot of ways, perhaps the more important ways, Bully is a far more interesting game.

It's a shame Rockstar all but murdered the folks here in Vancouver who made it though.

I loved Bully. It was the first thing I bought with my first paycheck. I thought the writing was clever without being smug, the gameplay was consistently fun, and the soundtrack was amazing. It's a pity I don't have any friends who would be interested in this game; if it's not another Legend of Zelda, or space marine FPS, they don't want to hear about it.

I thought Bully was a far better game than any of the GTAs. You kind of need a Rockstar open world game on the list, and this is the best of them. Great pick.

Also, chickosaurusrex, there have been four GotDs picked here so far. Dunno which ones you missed, but you might want to check out the other two.

I loved this game. I actually thought it would have been SO COOL if they had made one of the GTA downloadable episodes follow a boarding-school kid in Liberty City, adding bikes and skateboards and whatnot.

Also, maybe you couldn't drive (legally, anyway) so you'd have to use the public transit more, or get a friend who can drive... it'd open up so many possibilities! The stories could've been about rival schools, or various skateboard gangs, or B&T kids from Alderney... and it would've been set in freaking Liberty City.

I mean, wouldn't that have been a lot cooler than just playing through two more really similar takes on GTA IV? It would've taken balls on the part of Rockstar, but it could've been just brilliant.

Oh, and special shout-out to Shawn Lee for the music in Bully. Rockstar is so good at using licensed tracks that it was cool to see what they did with an original score - I really dug what Shawn put together.

I liked this better than the GTA games too. There was always some aspect of playing those games were it really did seem like Rockstar was guilty of the things their critics accused them of. Bully was so much smarter.

Worst part of writing about games: hard to find the time to go back and play titles you missed like Bully or The Darkness.

A lot of recentism in your games of the decade so far; calling out Bully as your Rockstar title of choice overlooks Grand Theft Auto 3 in 2001 which by any reasonable measure is the vastly more significant release; probably one of the top ten most influential games ever made, in fact.

By which I mean, keep picking titles I disagree with. It's neither fun nor thought-provoking to read a list of the safe choices.

The recentism will continue! But there are definitely some older titles as we go own. Even so, I just played many more games from 2005-2009 than I did from 2000-2004, so my list is titled in that direction.