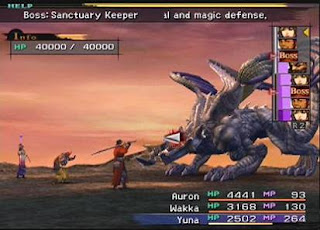 In the spring of 2002, I was itching for a new game. I'd played Grand Theft Auto III to completion, had maxed out my Tony Hawk skills, and, after three agonizing months of one brief and unsatisfying play session after another, I'd finally beaten Metal Gear Solid 2. Being broke at the time, it was important to me to buy something that I could sink some serious hours into, and get my money's worth. FFX seemed to fit the bill, but I was hesitant.

I'd tried and failed to get into some Final Fantasy games in the past. When we were kids, my brother and I had made it as far as the Earth Fiend in the original game before giving up. I sailed right through the SNES era. In high school, I borrowed Final Fantasy VII from a friend and made it as far as the world map before declaring the game boring and dumb. A breakthrough came during my sophomore year of college when, in an attempt to avoid doing anything productive, I downloaded an NES emulator and a Final Fantasy ROM. With the emulator running in one window, and a walkthrough open in another, I breezed my way through the game, gradually learning the systems and tactics that had eluded me in previous attempts. This led to some all-night play sessions, after which I would arrive to class, bleary-eyed, and try to follow along with some lecture about Jane Austen.

So Final Fantasy X was a bit of a gamble, but when you've got nothing, you've got nothing to lose. From the unexpectedly sad piano overture, I was hooked. This game wore its heart on its sleeve, and while that seems silly now, at the time I could relate to Tidus's feelings of alienation and angst. Even his whiny voice didn't bother me.

And while I've read plenty of complaints about this game from RPG purists, I loved all the things they hated. I was glad that most of the game was on rails, or close to it, so that it kept me moving. The sphere grid was a simple way to seem like I had control over my character builds, without really giving me too many options. And the storyline, in all its silly and melodramatic glory, connected with me.

One Friday night, I settled in for a long play session starting around 10 o'clock. At almost 7 the next morning, the bed shifted beneath me. From somewhere in my dorm, an old building in Boston's Back Bay, I heard a loud crack. For a few seconds, everything was wobbling ever so slightly. I was so tired from a nine-hour play session that I thought I must have been hallucinating. Next to my TV was a tall and rickety CD tower. I rubbed my eyes. It was swaying back and forth like a drunk person.

Sometimes you play the right game at the right time. If not for Final Fantasy X, I never would have been awake at the time. That's not all I have to thank it for. Although I never became a full-bore RPG guy, that was the springboard to successful playthroughs of Final Fantasy VI, Final Fantasy VII, and Chrono Trigger -- all great games in their own rights. And it reminded me that games do have the capacity to make you feel something, even if it's a 5.1 magnitude earthquake.
Posted by Mitch Krpata at 9:00 AM

That's a pretty neat story. Only thing this game ever did for me was stave off boredom that winter when I was stuck indoors with a broken ankle. In fairness, even if I was in one piece I probably would have just been playing it anyway.

When I revisit the game, I notice its flaws a lot more than its strengths, but it was an important part of that year for me. This is one of the games I pumped the most time into this decade.

Man, this game brings back memories...

I have always been feeling kind of stupid for liking the story and melancholic atmosphere so much, but maybe it's exactly the "the right game at the right time" thing you mentioned

Also, one of the greatest soundtracks I've ever heard until this day.

Unfortunately FFXII went in a different direction, resulting in me not liking it at all, for the most part.

I heard that Lost Odyssey is the game that gets closest to FFX, have you checked that out?

I just hope that FFXIII will return to a more narrative-focused, linear structure.

I have to say. This game remains as my favorite game of all time. I had never considered that it might ave been just as you said, the right game at the right time. I also saw most of the "problems" as strengths. Though, I forget that this game came out in this decade, while at the same time, feeling like I just finished it yesterday.

Here's an unexpected pick! FFX was greeted coldly by many series fans but I really enjoyed it. The sphere grid system was really innovative, and I was glad to see turn-based combat make a comeback. Even the story kept me interested until the crappy last boss fight.

You're a cool game FFX, I don't care what they say about you.

I LOVED the sphere grid system.

Unfortunately, I hated the voice actors and the contrived romantic plot that did not need to exist. Even the Oedipal underpinnings were much more interesting. Then again, I only played this game last year, and have been playing the series since IV, so I had entirely different expectations.

While I'll admit the story and music were excellent, and the battle system was pretty good, the graphics style was horrendously ugly in Final Fantasy X.

Square is known for garish graphics and FFX had the worst. Characters wore horrid garb and the whole thing just looked cheesy and stupid.

I was also not fond of the character development system and hated the random battles.

And when you add in a save point system that forces you to replay long cut-scenes and fight numerous battles over and over again, you end up with a great game hampered by numerous problems.

But I'm someone who has played every FF except for XI and have never liked or finished a single one of them.

As far as JRPGs go I love the Xenosaga series and whatever faults it has I forgive. Final Fantasy doesn't get the same pass from this decidedly Western Gamer.

Unknown said...
This comment has been removed by a blog administrator.
5:59 PM