Games of the decade: Braid 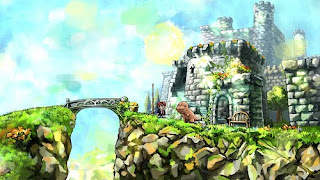 Braid
(2008, Xbox Live Arcade; 2009, PlayStation Network and PC)
Games are terrific at evoking certain strong emotions, such as excitement and fear, which they seem to do over and over. What they don't usually do such a good job of is elicting more subtle, complex, or ambiguous feelings, like sadness or regret. Braid is ambitious in many ways, none more so than its commitment to explore areas that games would usually rather ignore.

In contrast to the sometimes full-contact style of its creator, Jonathan Blow, Braid is a delicate game. The text that serves as a bridge between levels is written in such a way to suggest a mood, and not necessarily to convey facts. The symphonic music, too, doesn't underline the action but instead alludes to something happening out of sight. Even the painterly visuals suggest something missing in between the brush strokes. Much of Braid occurs by implication.

Then there are the rightly lauded puzzles. Braid is astoundingly difficult, though nearly always fair (I'll be honest, I had to look up the one where you had to bounce off an enemy that was itself bouncing off your time shadow). If the only purpose of the game was to show how games could challenge players without stifling them, then it would still be a success. That such thrilling and innovative gameplay could be wrapped up in such an affecting package -- and almost all the work of one man -- is nearly miraculous.

Nausea is now setting in...sorry, but I have a hard time believing Braid is a game of the decade.

My problem of course is I'm not a Mario kid. Didn't grow up with Nintendo, and have no affection for it or its offspring.

I agree that Braid seems to be designed to leave things implied. My problem with it is that some of the implied bits didn't feel like they were actually thought through. Like some of the gaps were not due to careful and considered omission (which would make the world and story feel richer), but because Blow didn't actually have anything to put there in the first place (which makes the world and story ring false to me). The story bits did a good job relating in clever ways to the new mechanics of the levels while setting the tone, but they felt hollow to me, like there was nothing to find if I dug one layer down.

The puzzles, on the other hand, are fantastic and it is very pretty. They're good enough to overcome the pretentious narrative and put it in an upper class. I wouldn't put it in a top 10 but I can certainly respect its inclusion, especially if the narrative worked for you.

Hey, that "jump on the guy who jumped on your shadow" is the one that I had to look up too! Now I feel better about doing so.

You know, I'd rate Braid highly just for what it was as a puzzle game. It had so many creative and brilliantly designed puzzle elements. So what if I didn't get the story? I think most of the jibber-jabber about whether it was meaningful or just pretentious was a product of the hype and the usual game-blogger desire to talk about games and art. Take the game out of that discussion, and I think you'll find it's still an awesome achievement.

Braid's all in the last level. The final sequence with the princess is one of the most emotionally powerful experiences I've had in any game. (Which is why the "gold stars" and "real ending" nonsense made me so angry.)